A big well done to the year 4 indoor athletes who finished second in the Newark competition last night at Newark Academy. They were narrowly beaten by a very fast Chuter Ede Balderton team but have still qualified for the district finals and will look to reverse the placings when we compete against them next time.

The Year 5 & 6 indoor athletics team were amazing last Friday in the County finals. They finished 4th out of the 8 teams who took part and just missed out on the bronze medal. They were competing against all of the winning teams from the 8 districts across Nottinghamshire. We are all super proud of them! We are proud to announce our amazing handball team won the Newark and Sherwood district finals this afternoon. A massive well done to the indoor athletics team who were absolutely amazing this afternoon. We were crowned district champions and finished a massive 23 points ahead of a very strong Lowes Wong team who were runners up. The children completely blew us away with the level of performance. Barnby Road Academy were very fortunate to receive a visit from Olympic Gold Medallist Shona Mccallin on Wednesday 8th January 2020. Shona has represented the GB women’s hockey team for a number of years and was part of the team that won gold at the Rio Olympics in 2016. She spoke to the children about her career and achievements to date and surprised them with the information that it all began at Newark Hockey club. The children were blown away by the visit and were amazed when she brought out her Gold medal to show them.

Some of the children were fortunate to have seen Shona play when the school took 26 Year six children to the Lee Valley hockey centre to watch the GB women & men qualify for the Tokyo Olympics in November 2019. The school hopes this inspires the children to be the best they can be and set aspirational goals in their own futures. We wish Shona and her team mates all the best in their quest for Olympic glory this year in Tokyo.

What talented chess players we have at Barnby!  We took 4 teams (16 players) to John Blow in Collingham to take part in the Autumn Chess Tournament against five other schools and they amazed us with their play.  Each child played three games and if they won each one, they gained a medal - we came home with many medals!  At the end of the competition, Barnby Road A & B finished in joint first place with Barnby C finishing third.  Well done children! 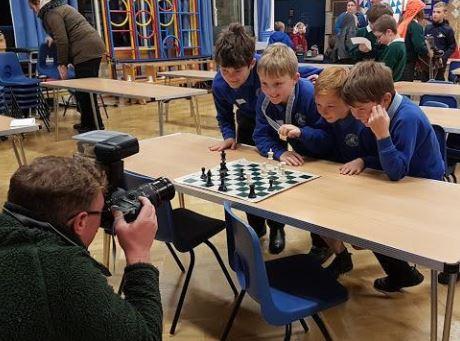 A massive well done to our Sportshall athletics team who were crowned The Newark family of schools champions yesterday. They were all amazing and managed to finish 21 points ahead of the runners up. A big thank you to Rose and Jessica who stepped in at the last minute because we had two girls who were ill. You were both superstars!

An incredible 2 - 1 win against  Southwell-based Lowes Wong in the final of the Newark Schools' Girls' football tournament resulted in Barnby girls being crowned champions. A series of skillful, determined and battling performances saw them fight off tough competition at John Hunt Primary this afternoon. As winners, they now go off to represent Newark and District in the Nottinghamshire County Finals on 9th November. Go Barnby girls!

Congratulations to all the children who competed in the Boccia tournament last night at the Joseph Whitaker Academy. We had a very successful evening coming first, second and sixth place overall. The first competitive tournament of the new school year. A massive well done to everyone!