In conclusion to our WW2 topic, the Y6 children visited ‘The National Holocaust Centre’. Here they stepped back in time to follow the journey of Leo, a German Jewish boy during the 1930s. Throughout the visit, pupils were engaged by an interactive tour, which expanded their already vast learning. Our tour guide was blown away with the children’s in-depth knowledge of the war and the interwar years. Our day drew to a close with each child playing a stone on a monument, that represented the 1.5 million children who lost their lives during the Holocaust. Throughout the day our wonderful Barnby pupils were extremely respectful and reflective of the terrible events of the Holocaust.

The pupils have thoroughly enjoyed presenting their projects to each other, as well

as to parents and careers.

Thank you for supporting the children during their projects and for attending our showcase afternoon.

We have been absolutely 'blown away' by the quality of the Year 6 projects this year, from all three classes.

Below are photos of Trent Class with their projects. As you can see, they are amazing and extremely varied.

Don't forget the Exhibition on Wednesday 1st December if you want to come and learn in more detail.

Thames class have been working in groups to compose their own piece of music for the ukulele. Listen to their masterpieces here 🎶 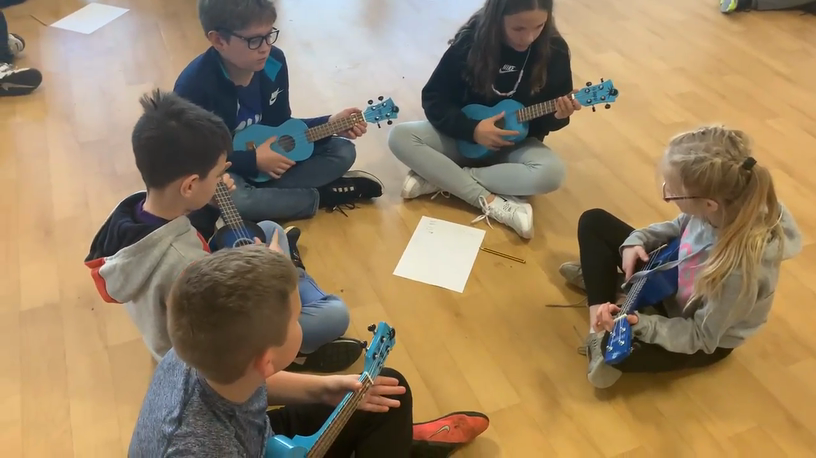 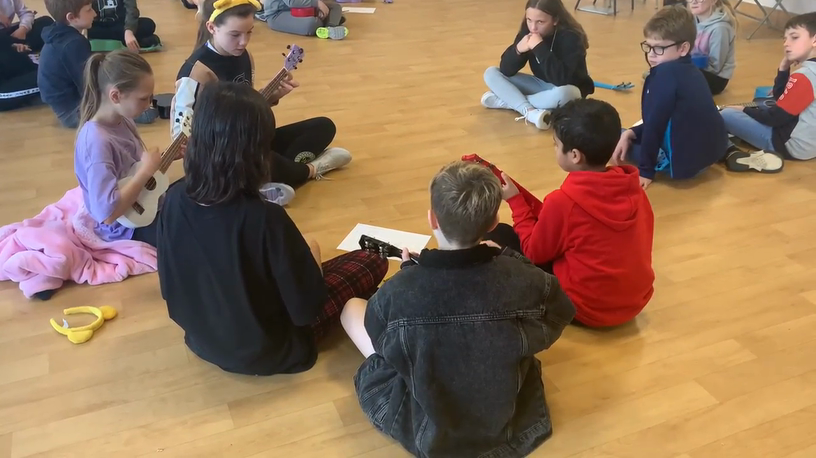 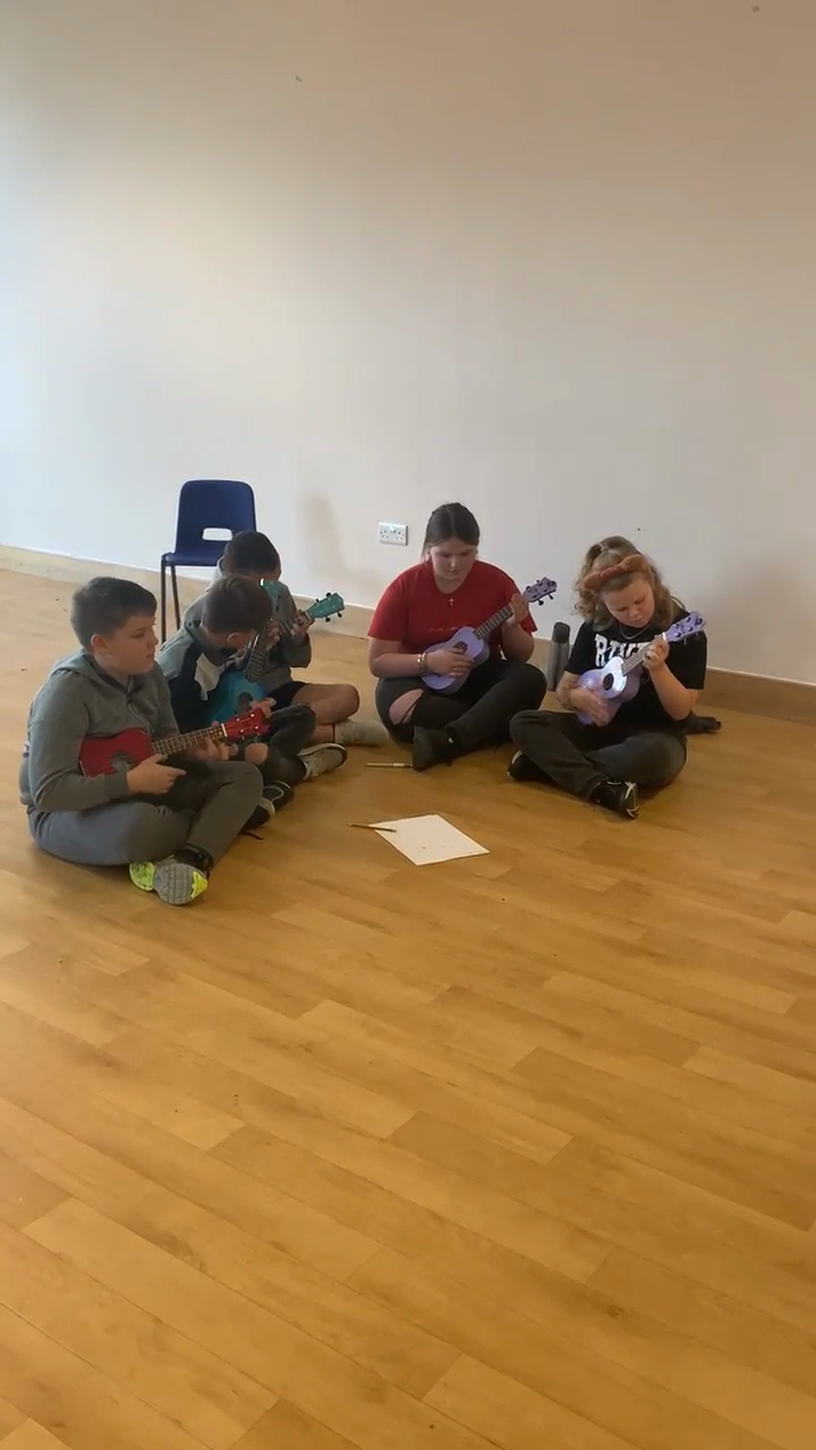 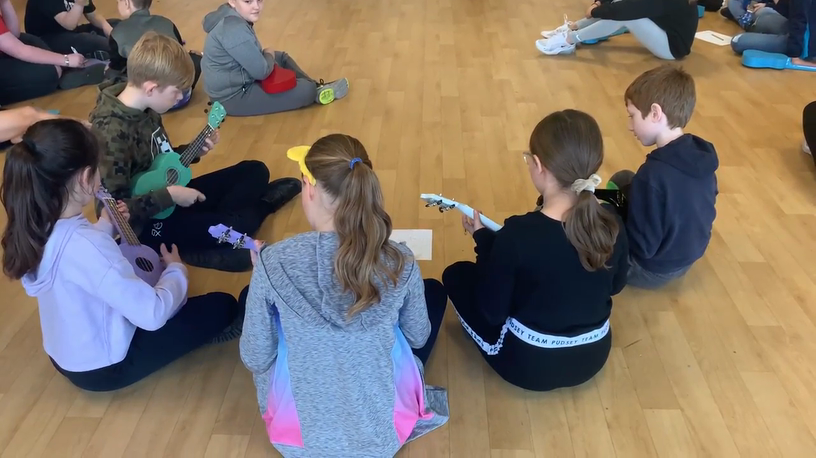 Having thought that they had escaped being removed from their familiar surroundings, Trent Class were at last evacuated to Brackenhurst last Friday 19th November. The weather was excellent and the children set off in generally high spirits. During their time away from home, they had to take cover in an Anderson Shelter, plant bean seeds in the 'Dig for Victory' garden (to help them become sulf-sustainable and to beat rationing), identify the owners of four World War 2 suitcases (including a suspected Nazi spy!) and identify the silhouettes of overhead planes, during the fantastic orienteering activity, so they would know whether they were allied or axis; friend or foe!

After being given the all-clear, children were re-billeted with their families just in time for the weekend.

On Friday, 26 Y6 children and 8 members of staff  made their way to Wembley to watch the English Lions in a must win match against Albania. With spirits and score predictions high, the children were not disappointed. Positioned behind the Albanian goal Barnby Road witnessed 5 outstanding goals, which they celebrated in style. After cheering and singing their hearts out all evening, the Barnby buses headed home to Newark. With memories made, the children nodded off with smiles on their faces. 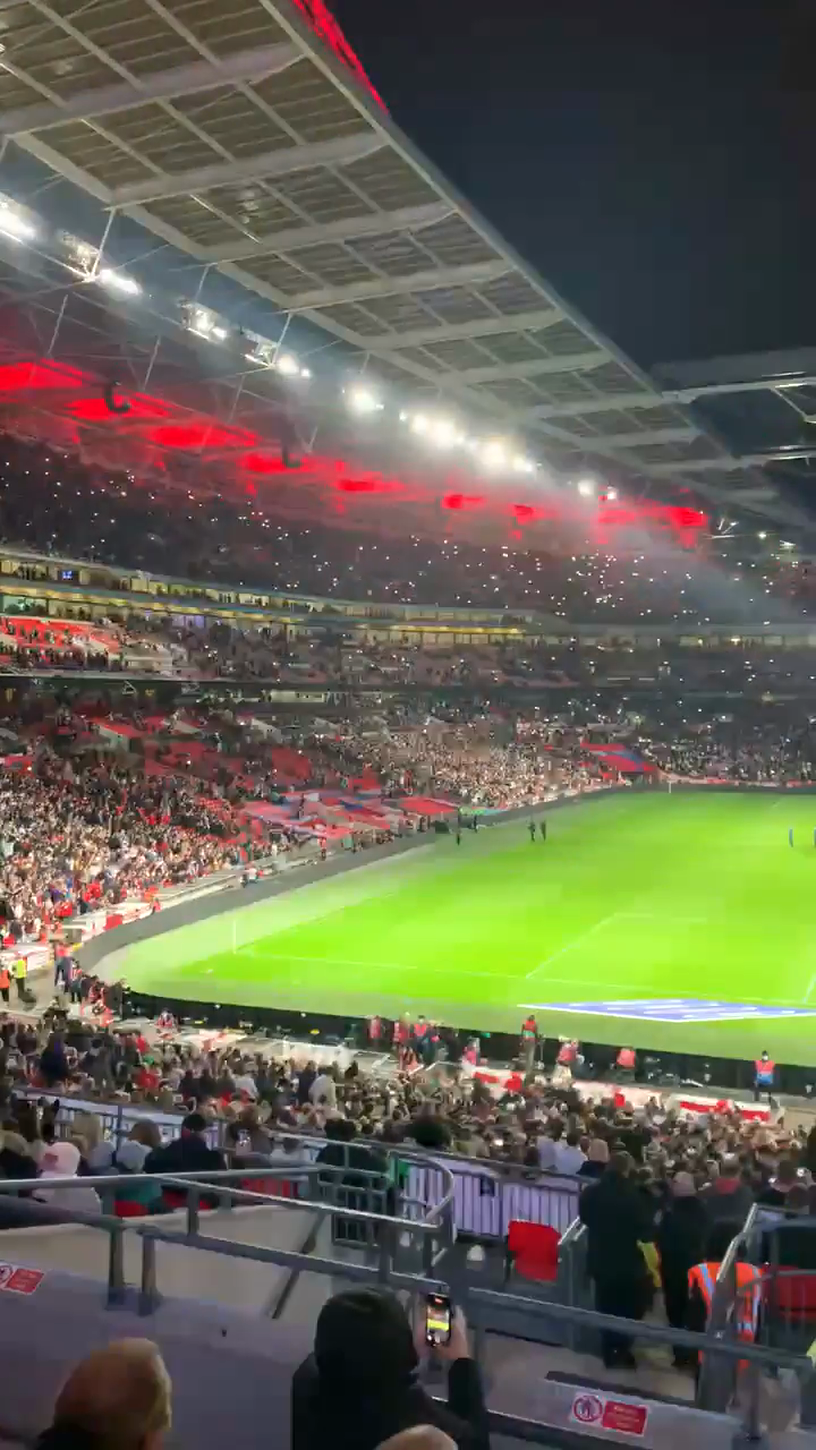 Last week Y6 became scientists. To investigate light, reflection, refraction and shadows the children carried out a range of fun experiments. They hypothesised the outcome of each experiment, found some surprising results and wrote up their findings.

The children in Year 6 have been celebrating Remembrance this week. On Tuesday 9th November, we were invited to take a small group of children to represent Barnby Road, and join other Newark schools, at the Newark Town Schools' Remembrance Service. This was held at the War Memorial behind the parish church and inside St Mary Magdelene church itself. Mr Barbuti and Mrs Brunning were accompanied by the two School Ambassadors, along with the two Pupil Council representatives from each Year 6 class.

On Thursday 11 th November the Year 5 children joined the Year 6s to hold a Remembrance Service at the memorial on the KS1 playground. This was led by Tony Roberts, school governor and former Mayor of Newark. Children read poems, listened to the Last Post and Reveille, played expertly by a pupil, and respectfully held a two-minute silence.

Silence was observed by all other year groups, and staff, across the school at assembly time. 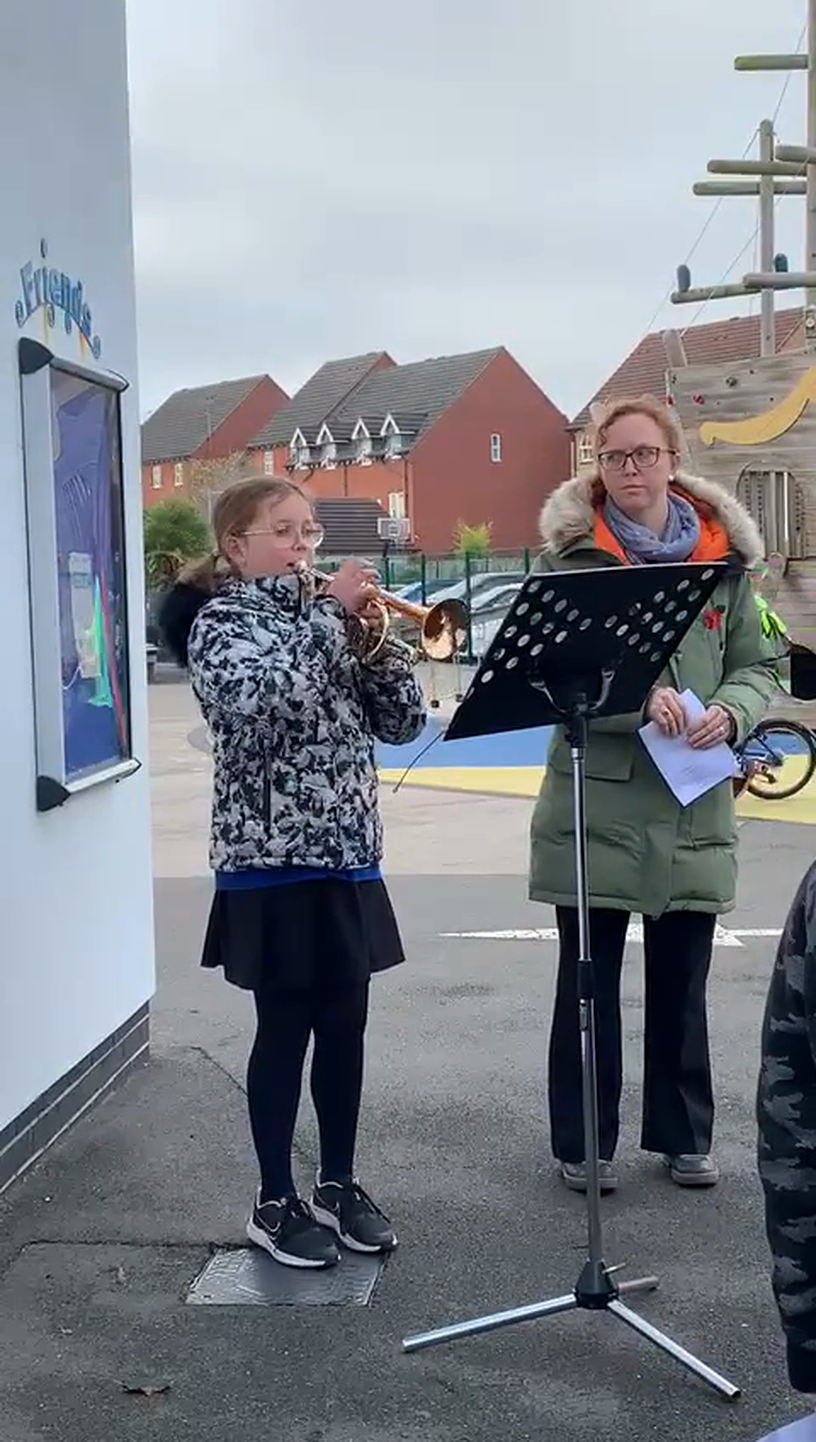 An outstanding rendition of The Last Post by a Year 5 pupil.

Today, Severn and Thames Class were evacuated to Brackenhurst as part of our studies in topic. Arriving early, the children were met by their ‘billeting officer’, Mr Rider. He then introduced the activities of the day which were to be orienteering, exploration of an Anderson Shelter and also an introduction to ‘Digging for Victory’. The children fully engaged with all of the activities, asking insightful questions, displaying excellent knowledge and also dressing for the part! Overall, we supported our studies with tangible moments of exploration as we could touch and see the various historical points of interest. The children were excellent and gave a brilliant account of Barnby Road, impressing the people they interacted with at every opportunity.

Our first topic is called 'World War II and the Holocaust'.

Our history work for the term will focus on the Second World War and particularly how children’s lives were affected during this time. They will learn about evacuation and rationing and how the Blitz affected children living in London and other major cities. We will enhance our learning by reading 'The Silver Sword' by Ian Serraillier, which tells of a Polish-Jewish family's traumatic struggle to reunite after the German invasion of Poland. This links excellently to our work, learning about the Holocaust, in the second half of the term.

Our work in English links to our topic in a cross-curricular way as much as possible. We use events such as the Blitz and evacuation as a basis for our writing and comprehension, also enhancing them with our Evacuee Day later in the term.

The children have also come home with details of the annual World War II home-learning project, which will culminate in an exhibition of their work after the deadline date of Monday 29th November. We are amazed every year as the quality gets higher and higher.

Unfortunately not the ones with chocolate chips.

Some cookies are necessary in order to make this website function correctly. These are set by default and whilst you can block or delete them by changing your browser settings, some functionality such as being able to log in to the website will not work if you do this. The necessary cookies set on this website are as follows:

Cookies that are not necessary to make the website work, but which enable additional functionality, can also be set. By default these cookies are disabled, but you can choose to enable them below: